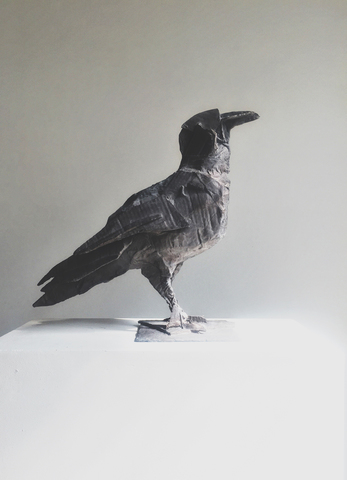 In Critical Mass, Olivier works in various media such as sculpture, drawing and installations. Using cardboard to sculpt with, Olivier intuitively creates forms and figures. He sees his position as an artist as that of a dragoman, an interpreter of the formless and the invisible, facilitating communication between the soul and matter. It is this process that contributes to his choice in materials. The present – which is what he focuses on – requires an immediate response, an expeditious choice of materials.

The artist operates with a strong sense of ubiety which becomes evident when he surrenders to making. Olivier analyzes and interprets clues given by the forms he’s interacting with. He sees and then only understands what the figure tries to convey. Then he adds and bends in order to comply with what the shape needs. This cyclical interaction between the artist’s eye and his response to what he sees, is repeated until the completion of this process where form leads the concept and not vice versa. And then finally the form exists, animated and alive.

Louis Olivier is a sculptor based in Johannesburg, South Africa. Born in 1976, in Vereeniging, he grew up in Bethal in Mpumalanga. He graduated with a degree in Information Technology from the University of Pretoria in 1998. Olivier worked in the IT field for three years and then made a dramatic career change in 2001, to work as a fulltime artist. In 2009, Olivier formed part of the Artspace Mentorship Programme (now the Johannes Stegmann Mentorship Programme) and was mentored by the established artist Wilma Cruise a greatly respected South African artist. He now lives and works in Johannesburg after moving his studio from Pretoria in 2012 to establish Workhorse, a bronze foundry and art studio situated in Marshalltown, Johannesburg.

The artist has done corporate commissions for Sasol and Rand Merchant Bank (RMB). The popular ‘DIFFERENTLY THINK.’ bronze and concrete bench at the street level entrance to Merchant Place was RMB’s contribution to Sandton’s Benchmark Project in collaboration with Louis Olivier – his first publicly located piece. He is also currently busy with the impressive Think Benches for RMB – a large scale project that has been underway for a few years.

This exhibition opens on Thursday, 29 October 2015 at 18h00 and closes on 21 November 2015 at Lizamore & Associates, 155 Jan Smuts Avenue, Parkwood. Please join us at the opening for a glass of wine and to meet the artist.