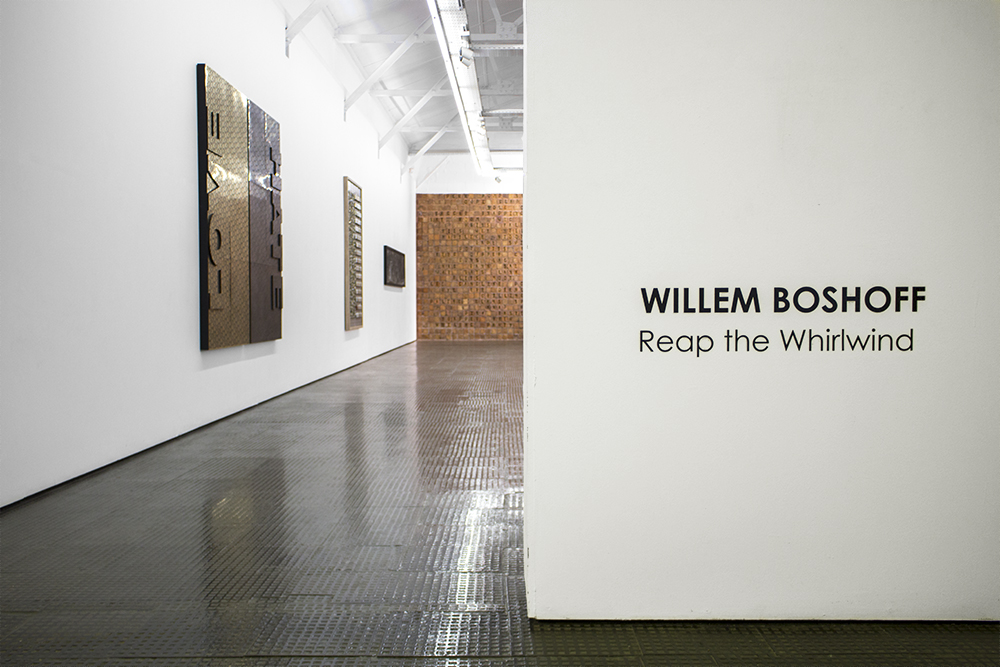 Willem Boshoff is a conceptual artist of international renown, having engaged his social, political and environmental contexts in evocative mixed media works, installations and performance art for over thirty years. His works result from intensive processes of sifting, collecting, ordering, crafting and translating, often taking years to complete and always opening up to new meanings and bodies of work. Boshoff is an obsessive collector and taxonomist of objects both natural and manmade, of words and paraphernalia from the various disciplines of literature, philosophy, botany, geography, anthropology and music. The artist’s interests both become and provide him with media for his work.

Despite describing himself as a pacifist known for his playful use of language and oft-curious collectables, Boshoff has never shied away from tackling weighty topical issues head-on and the exhibition Reap the Whirlwind continues along this trajectory. Showcasing a collection of new works, the processes and media that have become synonymous with the artist are seen here invested in current debates about language, transformation and international politics. The artist continues his exploitation of the transience and plurality of meanings, whether of words, objects, Holy Scripture and ancient wisdom.

In mixed media works that combine collected and found objects with text, the artist expresses his deep concern about the impact and spinoffs of, in particular, American imperialism. Boshoff distantiates himself from religion, yet does not discard ideas that resonate with his own pacifist worldview. As such his choice of texts from the Bible are in order to evoke ancient moral codes, and to highlight the hypocrisy and contradictions of warmongering in the name of peace and democracy for, ultimately, profitable gain.

In works such as Reap the Whirlwind (2015), Boshoff draws the viewer’s attention to whirling sickles, rusted and in disuse, with nothing to harvest. Boshoff exploits the flexibility of the sign and the potential meaning of this object, here re-purposed in an artwork. The title makes reference to the biblical verse Hosea 8:7; “they have sown the wind and shall reap the whirlwind”, which suggests a bitter reaping of the consequences of empty promises. The cyclical nature of the tool itself echoes the semiotic reference to ideas about ‘what goes around, comes around’ or ‘you reap what you sow,’ here an ominous prophecy.

Home to Roost (2015) brings the critique more particularly to American foreign policy and the so-called war on terror. The title refers to the 9th century saying ‘the birds come home to roost’ and the title of book by Churchill Ward, On the Justice of Roosting Chickens: Reflections on the Consequences of U.S. Imperial Arrogance and Criminality published in 2003. The work contains Boshoff’s collection of old measuring instruments, the tools of empiricism and cold instrumentalism.

In Time to Kill (2015), small, toy-like gas ampules, evoking bombs and chemical warfare, are aligned in neat rows next to the faces of discarded wristwatches that bear the patina of decades worn on the arm. These little machines worn so close to human veins have come to a standstill, suggesting the fragility and transience of human life. The work confronts the viewer with a question – what is this time? To what action are we called upon at this time?

The process of making intelligible, or of translating ideas into words or images, from one language to another, has been central to Boshoff’s oeuvre. His fascination with language engages its richness, its power and chameleon-like character across cultures. Mutatis Mutandis (English/Afrikaans) (2015) and Word Woes (2015) reflect on the longstanding debates around Afrikaans-medium education at traditionally Afrikaans university campuses, recently intensified by student movements for transformation. These works demonstrate Boshoff’s consciousness of the burden of apartheid’s history upon the Afrikaans language, its historic skirmishes with both English – see also About-Face (English/English)(2015) – and indigenous languages as well as the the treasure of his mother-tongue’s rich vocabulary and literary tradition – as illustrated in Overgeset Synde (Afrikaans/Afrikaans)(2015). Although Afrikaans is labelled as the language of the colonial oppressor, it remains an indigenous language and mother-tongue of black and white South Africans. The artist’s dexterity, curiosity and his command of language is articulated in works that evoke the trickster or the Dadaist joy taken from playing with words and their slippery meanings. Mutatis Matundis and Word Woes present lists of words that present uncanny relationships between the languages, highlighting linguistic difference as simultaneously a source of play, humour, confusion and disagreement. In Mutatis Matundis the two wooden panels seem to mirror each other as the sequences of letters are flipped around to present alternatives: ‘Farts’ becomes ‘straf’ (punish), and ‘roost’ becomes ‘stoor’ (barn or preserve). The very title ‘Word Woes’ lends itself to a similar game: it may denote either grief about words or language, or when read in Afrikaans, suggests becoming rough or uncontrollable, even desolate. Presented as a wall built from hand-made bricks carved with letters, the work presents a barrier or dead end – the viewer literally hits a brick wall. Yet, the humour and play revealed in this wall reminds of the inherent malleability of language and fluidity of meaning.

Considering the ephemeral sand installation Book of Sand (2015), this exhibition in its entirely is perhaps Boshoff’s own ‘book of sand’ – a collection of emotions as experienced by one lost in a desert, without hope, like the SOS of the marooned written in sand. But the action itself, of leaving a message to the unknown, presents a trace of some last hope flung out to the world.