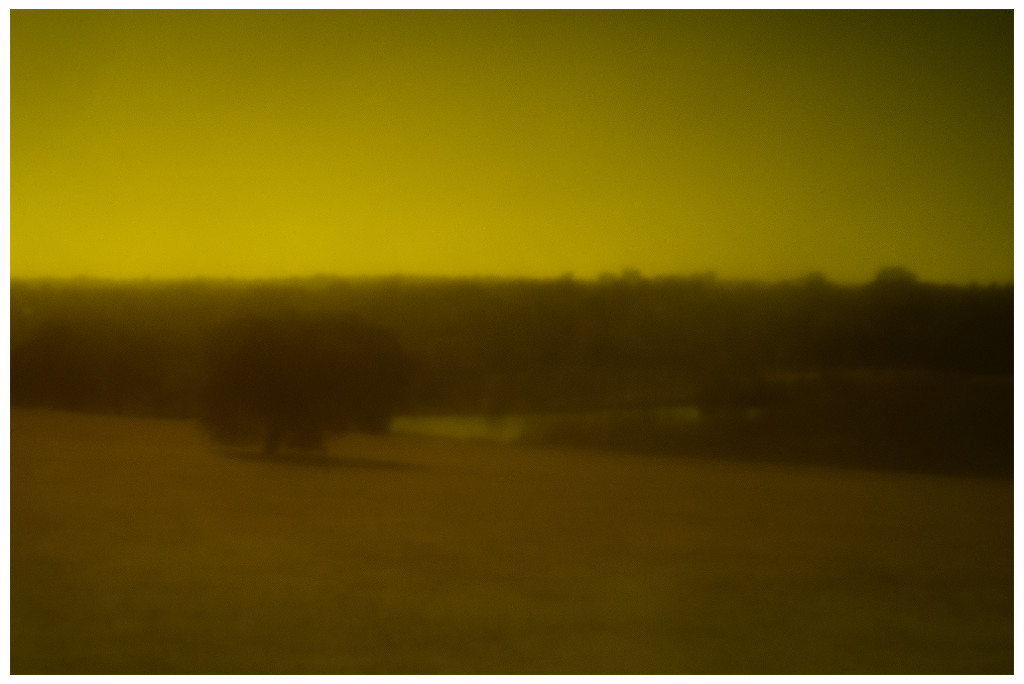 I would like to thank Ryan Hitchcock and Simonetta of the Art Room for their kindness and generosity. It is with pride that we have included the “Untitled” photograph of Ryan caringly framed by Simonetta. This photograph was Created at Johannesburg Botanical Gardens (Emmarentia Park) in June 2015; the digital pinhole photograph is printed on Archival paper on Diasec mounting. You will find below a fantastic article on Pinhole Photography written by Jon Grepstad in 1996.

Pinhole photography is lensless photography. A tiny hole replaces the lens. Light passes through the hole; an image is formed in the camera.Pinhole cameras are small or large, improvised or designed with great care. Cameras have been made of sea shells, many have been made of oatmeal boxes, coke cans or cookie containers, at least one has been made of a discarded refrigerator. Cameras have been cast in plaster like a face mask, constructed from beautiful hardwoods, built of metal with bellows and a range of multiple pinholes. Station wagons have been used as pinhole cameras – and rooms in large buildings. Basically a pinhole camera is a box, with a tiny hole at one end and film or photographic paper at the other.Pinhole cameras are used for fun, for art and for science.

Designing and building the cameras are great fun. Making images with cameras you have made yourself is a great pleasure, too. But in serious photography the pinhole camera is just an imaging device with its advantages and limitations, special characteristics and potentials. By making the best of the camera’s potential great images can be produced. Some of the images could not have been produced with a lens.

Pinhole images are softer – less sharp – than pictures made with a lens. The images have nearly infinite depth of field. Wide angle images remain absolutely rectilinear. On the other hand, pinhole images suffer from greater chromatic aberration than pictures made with a simple lens, and they tolerate little enlargement.Exposures are long, ranging from half a second to several hours. Images are exposed on film or paper – negative or positive; black and white, or color.

Pinhole optics, by the way, are not only used in photography. There is one animal in nature which uses a pinhole for seeing – the mollusk Nautilus. Each eye has an accommodating aperture – the aperture can enlarge or shrink. In thisdrawing, originally taken from a book published by Arthur Willey in 1900, the eye is the oval opening to the upper right.

The basic optical principles of the pinhole are commented on in Chinese texts from the fifth century BC. Chinese writers had discovered by experiments that light travels in straight lines. The philosopher Mo Ti (later Mo Tsu) was the first – to our knowledge – to record the formation of an inverted image with a pinhole or screen. Mo Ti was aware that objects reflect light in all directions, and that rays from the top of an object, when passing through a hole, will produce the lower part of an image (Hammond 1981:1). According to Hammond, there is no further reference to the camera obscura in Chinese texts until the ninth century AD, when Tuan Chheng Shih refers to an image in a pagoda. Shen Kua later corrected his explanation of the image. Yu Chao-Lung in the tenth century used model pagodas to make pinhole images on a screen. However, no geometric theory on image formation resulted from these experiments and observations (Hammond 1981:2).

In the western hemisphere Aristotle (fourth century BC) comments on pinhole image formation in his work Problems. In Book XV, 6, he asks: “Why is it that when the sun passes through quadri-laterals, as for instance in wickerwork, it does not produce a figure rectangular in shape but circular? […]” In Book XV, 11, he asks further: “Why is it that an eclipse of the sun, if one looks at it through a sieve or through leaves, such as a plane-tree or other broadleaved tree, or if one joins the fingers of one hand over the fingers of the other, the rays are crescent-shaped where they reach the earth? Is it for the same reason as that when light shines through a rectangular peep-hole, it appears circular in the form of a cone? […]” (Aristotle 1936:333,341). Aristotle found no satisfactory explanation to his observation; the problem remained unresolved until the 16th century (Hammond 1981:5).

The Arabian physicist and mathematician Ibn al-Haytham, also known as Alhazen, experimented with image formation in the tenth century AD. He arranged three candles in a row and put a screen with a small hole between the candles and the wall. He noted that images were formed only by means of small holes and that the candle to the right made an image to the left on the wall. From his observations he deduced the linearity of light. (Hammond 1981:5).In the following centuries the pinhole technique was used by optical scientists in various experiments to study sunlight projected from a small aperture.

In the Renaissance and later centuries the pinhole was mainly used for scientific purposes in astronomy and, fitted with a lens, as a drawing aid for artists and amateur painters.

In 1475 the Renaissance mathematician and astronomer Paolo Toscanelli placed a bronze ring with an aperture in a window in the Cathedral of Florence, still in use today. On sunny days a solar image is projected through the hole onto the cathedral’s floor. At noon, the solar image bisects a “noon-mark” on the floor. The image and noon-mark were used for telling time (Renner 1995:6).

In 1580 papal astronomers used a pinhole and a similar noon-mark in the Vatican Observatory in Rome to prove to Pope Gregory XIII that the spring equinox fell incorrectly on 11 March rather than on 21 March. Two years later, after careful consideration, Pope Gregory XIII corrected the Julian calendar by 10 days, thus creating the Gregorian calendar (Renner 1995:7).

The first published picture of a pinhole camera obscura is apparently a drawing in Gemma Frisius’ De Radio Astronomica et Geometrica (1545). Gemma Frisius, an astronomer, had used the pinhole in his darkened room to study the solar eclipse of 1544. The very term camera obscura (“dark room”) was coined by Johannes Kepler (1571–1630). At his time, the term had come to mean a room, tent or box with a lens aperture used by artists to draw a landscape. The lens made the image brighter and focused at a certain distance. Thus this type of camera differed from the pinhole camera obscura used by Frisius in 1544. In the 1620s Johannes Kepler invented a portable camera obscura. Camera obscuras as drawing aids were soon found in many shapes and sizes. They were used by both artists and amateur painters.

Sir David Brewster, a Scottish scientist, was one of the first to make pinhole photographs, in the 1850s. He also coined the very word “pinhole”, or “pin-hole” with a hyphen, which he used in his book The Stereoscope, published in 1856. Joseph Petzval used the term “natural camera” in 1859, whereas Dehors and Deslandres, in the late 1880s, proposed the term “stenopaic photography”. In French today “sténopé” is used for the English “pinhole”. In Italian a pinhole camera is called “una fotocamera con foro stenopeico”. In German “Lochkamera” and “Camera obscura” are used. The Scandinavian languages tend to use the English “pinhole” as a model – “hullkamera”/”holkamera”/”hålkamera”, though “camera obscura” is also found, and is the term preferred by myself in Norwegian.

Sir William Crookes, John Spiller and William de Wiveleslie Abney, all in England, were other early photographers to try the pinhole technique. The oldest extant pinhole photographs were probably made by the English archeologist Flinders Petrie (1853–1942) during his excavations in Egypt in the 1880s. Two of his photographs are reproduced in Renner (1995:39,40). It should be noted that Petrie’s camera had a simple lens in front of the pinhole.