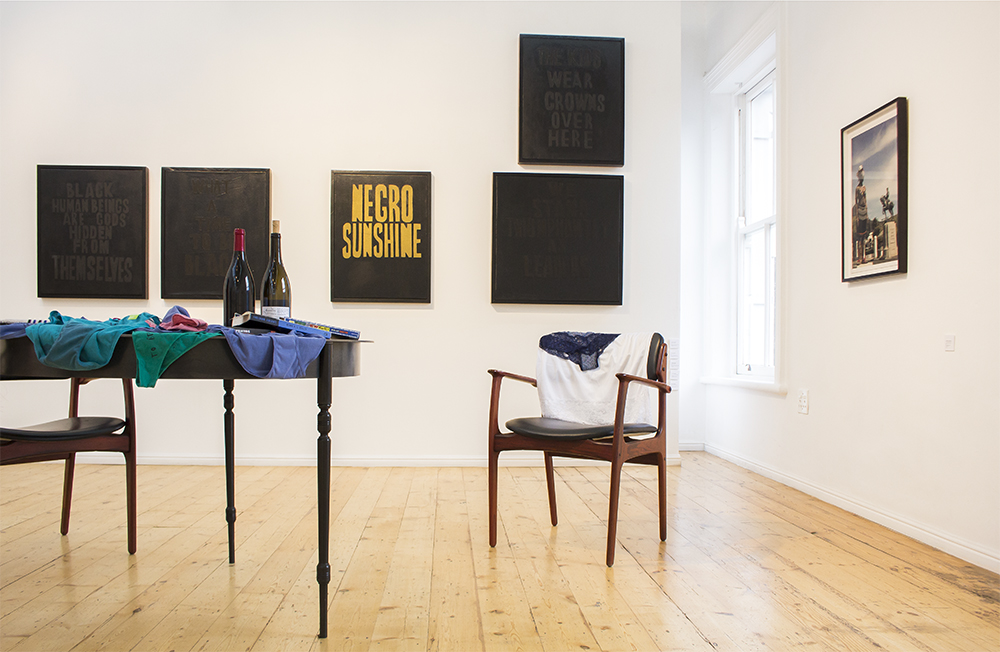 SMAC Gallery presents Nothing Personal, a group exhibition featuring a selection of young and emerging artists from Southern Africa, currently practicing within the region.

The term ‘Nothing Personal’ implies many things, but inseparable from its use, is the knowledge that the speaker is aware of the discomfort caused by the ensuing statement and yet, will speak the words anyway.

An informal prefix to insulting or offensive statements, whilst dragging a silent ‘but’ behind itself, the use of the term ‘nothing personal but….’ has come to be recognized as some kind of thunderous set-up, before a storm-like punch line. The peddler of such a phrase cloaks their statement in such a glaringly transparent manner, that their attempt at diplomacy is often more vexing than their intended blow.

The idea of ‘the personal is political’ was popularized following the titling of a paper authored by radical feminist and writer Carol Hanisch in 1969. Due to its accuracy and ‘interpretation-ability’, many social movements to date have adopted this title-turned-statement. This is mostly due to the use of the word ‘personal’, the definition of which largely depends on comparison and differentiation. The ‘personal’ relies on interpretation. ‘Interpretation’ relies on understanding and around we go…

The meaning of the word ‘personal’ is best understood in terms of ‘self’ and ‘other’ – both of which rest, almost solely, on context. This exhibition is therefore thematically placed at the intersection between the private and the public, or the personal and the political – respectively and interchangeably. The artists featured in this exhibition, each engages with context (as a concept) through direct reference or complete negation, both manners speak volumes to those that choose to listen.

The phrase ‘nothing personal but…’ is frequently used in a local context to express criticism that will certainly offend, whilst implying that one either can not, or has not applied time and forethought to the delivery. The manner in which each of the artists in this exhibition silently apply this statement to their work, is based on audience understanding, context, and the artist’s own interpretation of ‘self’ and ‘other’.

On encountering a series of black and white photographs titled; Being Lhola Amira I-VI (2016), the juxtaposition of site specificity and ‘timelessness’ is instantaneous. Lhola Amira is all of us and none of us simultaneously. Her appearing character represents a ubiquitous wonder, encompassing all conceivable gender, cultural and racial categorisations, while remaining resonant to the individual.

Ruann Colemann meticulously searches for form and balance within his understanding of his working environment as ‘natural’. The artist’s investigation of these concepts is evident in his work Abacus 1.1 (2016) and Loop (2016), each piece representing both the material and the immaterial.

Katlego Tlabela takes his cue quietly affirming what he believes. His work claims no propaganda, but rather the displaying of experience and opinion. There is no offence, just an unassuming recording of what the young artist has experienced in his practice thus far.

Similarly Siwa Mgoboza tackles preconceived ideas of identity and cultural norms based around certain signs or, in this case, patterns and textiles. His work Once Upon a Time in Africadia (2016), offers a platform of which to reconsider ones own understanding of ‘cultural norms’, encouraging looking as opposed to just seeing.

Mongezi Ncaphayi’s large-scale abstractions take a different tack. Working intuitively with the repetition of form and colour, the artist creates intricate works on paper by combining paint and printmaking techniques. A mix of organic painterly marks and ridged hand-drawn lines, each process overlapping the prior, forming a clear indication of process that is underpinned by an arrangement of pattern, line and shape that echo the tempo and rhythm of Jazz compositions, on a scale that pushes the traditional limits of work on paper.

Zimbabwean artist Wallen Mapondera’s assemblages provide a corresponding feeling of satisfaction in repetition, evoking interest in the pattern created through the use of such a banal material like cardboard boxing, appropriated into multiple ‘window’ forms through which one can see the rarely seen space between wall and artwork.

Alexandra Karakashian’s paintings move seamlessly into view, presenting audiences with fascinating abstract compositions that ignites a contemplation of the environment through her use of materials like oil and salt.

Euridice Kala, from Mozambique, also makes use of minerals in her video installation titled; Measuring Blackness and a Guide to Other Industries (2015), but Kala nods to different connotations centered around racial definitions of colour, that reference commodities such as salt (historically considered extremely valuable). This work was shown at the 12th Edition of Dak’Art in Senegal this year and engages with the changing values used as descriptions or indicators of race and identity.

Sethembile Msezane intercepts similar presumptions and comparisons with her Public Holidays (2013) performance series. A documentation image of one of these performances titled; Untitled (Heritage Day) (2013, depicts the artist standing in front of the South African Parliament in Cape Town. The work highlights the relative nature of ‘cultural heritage’ in South Africa and begs the question ‘whose heritage?’

Olivié Keck’s Over My Dead Body (2014) and Malarkey Dowry (2011-2016) reveal the calming nature of compulsion. Lulling viewers back to an atmosphere of time as abstract, opposed to the immediate or urgent.

In both Cloud Formations (2016) and Feng Shui for Chi II (2016), Katharien de Villiers’ use of industrial and synthetic materials combined with her own brand of ‘home and garden hardware –reimagined’, injects a measure of artistic playfulness into her aesthetic. The result is a weighted contrast between mass-production and artisanal hand-made objects, suggesting a tenuous opinion of the immediacy of contemporary societal art practices.

Christiaan van Eeden’s work gently points out thoughtless assumptions around intended functions of various unrelated objects. This can be seen in; New Age Lifestyle with a Vintage Feel (T’s)& (C’s)(2016), each item brings with it a complex context that allows Van Eeden to open a ‘micro-stage’ on which he ‘curates’ multiple contexts into a painting.

Ruby Swinney’s paintings depict imaginings of semi-formulated memories of faceless individuals frozen mid-action, one cannot tell if this effect is caused by sights seen at a high velocity or in slow motion.

An installation by Miranda Moss, Although they didn’t come in peace as least they brought some nice things thanks but no thanks I’m trying to quit (2016), hypnotizes as the mind tries to compute what the eye is seeing. Moss leads viewers on a journey starting with intrigue, to disbelief, followed by suspicion, and lastly contentment as understanding dawns.

But then again, it’s Nothing Personal….