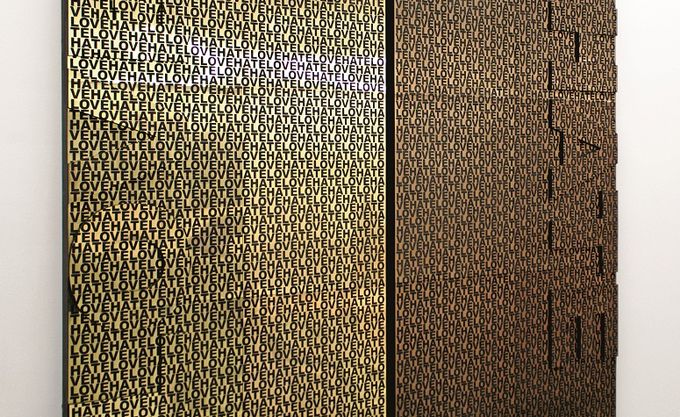 WILLEM Boshoff’s new solo exhibition, Reap the Whirlwind, has you reaching for a dictionary — or at least Google. Is there a word for someone who obsessively studies dictionaries, searching for patterns? An online search reveals a few related preoccupations; linguist, hieroglyphist and semiotician.

No doubt Boshoff’s idiosyncratic practice has touched on these professions but none of these terms captures his peculiar fixation on cataloguing words. However, it does seem that “words spelt the same in English and Afrikaans” is a popular search topic on the engine.

This is the basis for the central installation in the show, Word Woes, which is a veritable wall of handcast bricks pinned to a wall inside the Smac Gallery, Cape Town. Words are carved into some of the bricks, presenting those used in both English and Afrikaans — such as “lies”, “brood,” and “prop”.

It is a fascinating list, which includes words — such as “spits” and “reuse” — highlighting the irony of the interrelationship between two languages that were once viewed in the apartheid era as in competition for (cultural, linguistic, political) dominance. For Boshoff — and perhaps many Afrikaans speakers — this battle continues. Particularly given recent decisions taken at historically Afrikaans universities to stop tuition in that language, observes Boshoff with a hint of bitterness during a walkabout in the gallery.

For an Afrikaner, these changes would be viewed as the last nail in the coffin of cultural, linguistic and political supremacy. Boshoff appears to lament its loss of status — “You are lucky you’re an English speaker,” he says to me. I grit my teeth, remembering being forced to learn and speak Afrikaans during my school career and being subjected to American TV shows dubbed in this language.

Reap the Whirlwind consists of works dealing with other subject matter but it is the juxtaposition of English and Afrikaans that is the most interesting — and political. Mutatis.Mutandis (English/Afrikaans) is a diptych consisting of two works with English words carved into wood on one side and Afrikaans ones on the other. The letters are reversed to create a sort of mirroring effect. “Kelp” becomes “plek” (place in Afrikaans) and “pink” is “knip” (cut in Afrikaans). You can’t resist making connections between the words; ruminating for example on how kelp is defined by the fact that it is tossed about in the sea until it is uprooted and has no definite “place”.

The deep-seated rivalry between English-speaking and Afrikaans-speaking people in this country has been largely forgotten as the focus has shifted to divisions along racial lines, with all whites being lumped in one homogenous group. Boshoff doesn’t quite revive the divisions, but perhaps reminds viewers of them, while simultaneously blurring the lines between the languages (and by proxy those whose identities are tied to them).

As English and Afrikaans words appear the same — or operate as mirrors of each other — there is a sense that these languages are indivisible, though of course, when you compare the meanings, differences (and loose connections) emerge. Either way the two languages appear off each other — in instances they may be set up as “opposites” but this is almost always revealed to be an oversimplification.

At times different dynamics can be detected with a word pairing. This idea is crystallised in another scripto-visual mirrored work LoveHate, which presents each of these words on different panels, though the smaller repetitions of the words that form the “body” of the work, so to speak, are interwoven.

Boshoff’s practice has been defined by verbal interplay and everything to do with words, from engaging with books as both objects and ideological vehicles to the origin of languages. You can’t help wondering why he isn’t a writer or librarian if it wasn’t for his obvious ability for imbuing words with physical weight. He makes words “real” by turning them into tactile objects, allowing viewers to get beyond the meanings, or perhaps wrestling with them, as he sets up situations in which they must physically “confront” words, or be prevented from accessing them such as one of his seminal works The Blind Alphabet, where the physical “words” are beyond reach.

It is ironic, therefore, or perhaps expected that Boshoff’s “words” would land him in hot water. The 2011 scripto-visual work titled Proud to be a Racist caused a furore (in SA) last year when it was displayed at the SA Pavilion at the 56th International Venice Biennale.

He expected the backlash that his “racist” work evoked (though it only came years after the work was first exhibited at the Goodman Gallery), he says. His new exhibition is not exactly drained of contentious political content — aside from the English/Afrikaans line, he makes a few digs at America’s supremacy and you could interpret his LoveHate work as a wry response to the criticism the 2011 artwork provoked. The impressive brick wall installation, Word Woes suggests that the barriers society erects in delineating difference can only be built with the “rival’s language”, enforcing a strange kind of intimacy or connection.

Another “racist” work is in the pipeline — it wasn’t ready in time for this show — and he is figured in it and has committed to “insulting myself in the worst way possible”, he says.

• Reap the Whirlwind will show at the Smac Gallery in Woodstock, Cape Town until February 6