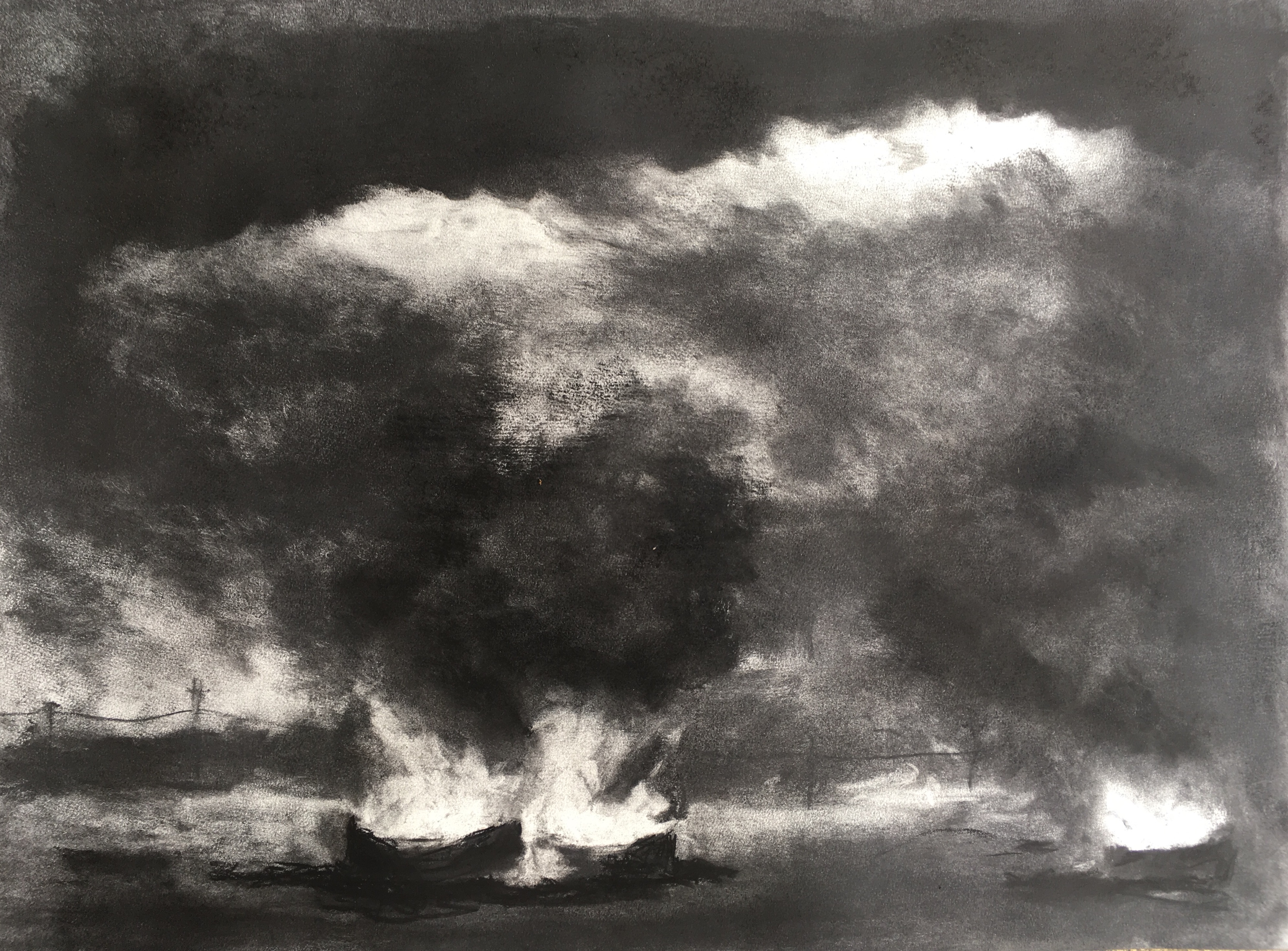 Charcoal defines itself as a black amorphous form of carbon made by heating wood or other organic matter in the absence of Air.

Themba decides to bring it back to life and tames this burned matter to suffocate, in this work, the Fabriano paper. Never did I see fire presented to us with its own consequence as the selected medium, and with such talent. This drawing is a powerful masterpiece of raw simplicity. Bull’s eye…So little to release so much before the ashes…

The landscape is bare. Fertility only lies here as a souvenir. The horizon bears a scar, simply as to confirm the proximity of mankind to the crime scene.

The revolt is burning. Deliveries meet their shortfall, promises are broken and dreams vanish. The brazier roars again; the braziers are back. The true freedom fighters have now left and power has taken over wisdom.

The air becomes foul and irrespirable.

The rise of the African springs growls in the distance…

Many more will follow until all of us willingly decide to search deeply within ourselves ( Socrates’ “ gnoti seauton ” ) the abundance and diversity of our true wealth to be shared once ignited by the most sustainable energy of Love.

Many more will follow until we cease to outsource the responsibility of being. The religions, political parties, ideologies and systems of society we created like Pygmalion will continue to divide our togetherness, our belonging to Life. They will not enlighten our human condition. Let Ego surrender and humility triumph. We are one.

I had the privilege to assist to the last performance at the Market Theatre in Johannesburg of the play “ I see you ” ( 1 ) which somehow illustrates so well these lines and is based on a real encounter. The play addresses the questions of a new generation of South Africans encountering their traumatised past. Even though the storyline is based in today’s South Africa, the play is truly universal.

Ben meets Skinn for a night out once the three blows have been hit. However the party is promptly interrupted by the police. Ben is a cheese-boy, a young student. He doesn’t know too well his own history and is accused of a crime he didn’t commit. Officer Buthelezi, a former freedom fighter, can’t let it go: “I don’t need your “ sorries ” white boy. Yes you heard right. You know white people think we’re the same? We both look black. But only one of us is black.”

Ben remains unable to soothe the police officer, to bridge their gap, until, extenuated by the relentless questioning, he manages to release a whisper: “ I LOVE YOU …”.

The curtain may fall.

Who, What, Where, When …
African springs growls, AFSACSA, Charcoal defines itself, Johannesburg, SAFFCA, Saint-Émilion, Themba khumalo