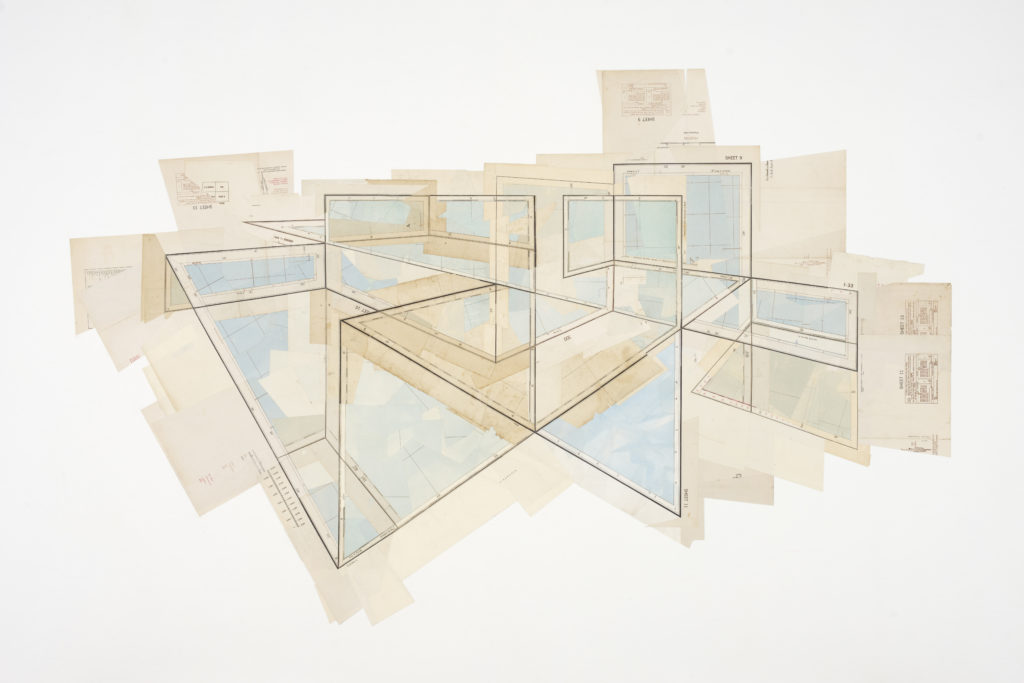 ‘When an echo bounces off a wall, the ephemerality of a sound is reflected off the solidity and geometry of a physical environment, a voice physically meets context, defining the space between sender and surroundings. ‘Sounding’, the practice of using sound to measure depth in a body of water, utilizes the echo, by bouncing sound off against the seabed and ‘catching’ it, as it returns to the sender. The water is measured without physically entering it, yet the unit of calibration used to define the depths in water necessarily involves the body – measured in feet or fathom, nomenclature plunges the body into the depths, even if only symbolically. The body is implied even where the body cannot go. ‘

(Artists statement included as insert in the Depths In Feet publication, published on the occasion of the Echo Geometry solo exhibition, Goodman Gallery 2015)

Echo Geometry 2016 builds on the Depths in Feet drawings, an ongoing series of collaged drawings, produced from 2015, in which areas depicting masses of water and ocean is collected from a broad variety of maps. The depiction of water on most geographical maps is a contradiction in terms. As a fluid, ephemeral entity, water refuses mark making and a certainty of form. It is essentially the un-map-able that exists within the map itself. Once excised from its geological context, the shards of ocean carry only the semiotic coloration, the faint blues and dirty greens that mark the depths that they signify.

Both Echo Geometry and the Depths in Feet series reassembles these fragments with a focus on the borders of the maps from which the fragments were taken. The cartographic borders are reassembled into two-dimensional ‘drawings’ that explore and subvert a variety of visual strategies employed to construct the illusion of perspective, spatiality and dimension. The illusion of volumes and interiors suggested through the pictorial constructions (or drawings) resists the inherent flatness of the maps that they are, in search of interiority. The works are constructed to contain a friction between cartographic flatness and pictorial illusion; between the fact of their object-ness and the spatial fiction that they facilitate.