Join us at 16:30 on Sunday 29 November for the Open Studio of Keneilwe Mokoena and Helena Hugo at Entabeni Farm Knysna.

Since the 15 of January 2017, SAFFCA has started an Artists Residencies’ Program at Entabeni Farm in association with Axon Properties in one of the obvious stops on the South African Garden Route. Two artists are usually working at the same time in our space in Knysna. The one artist is from the Southern part of the African continent while the other one would come as often as possible from anywhere on the globe. 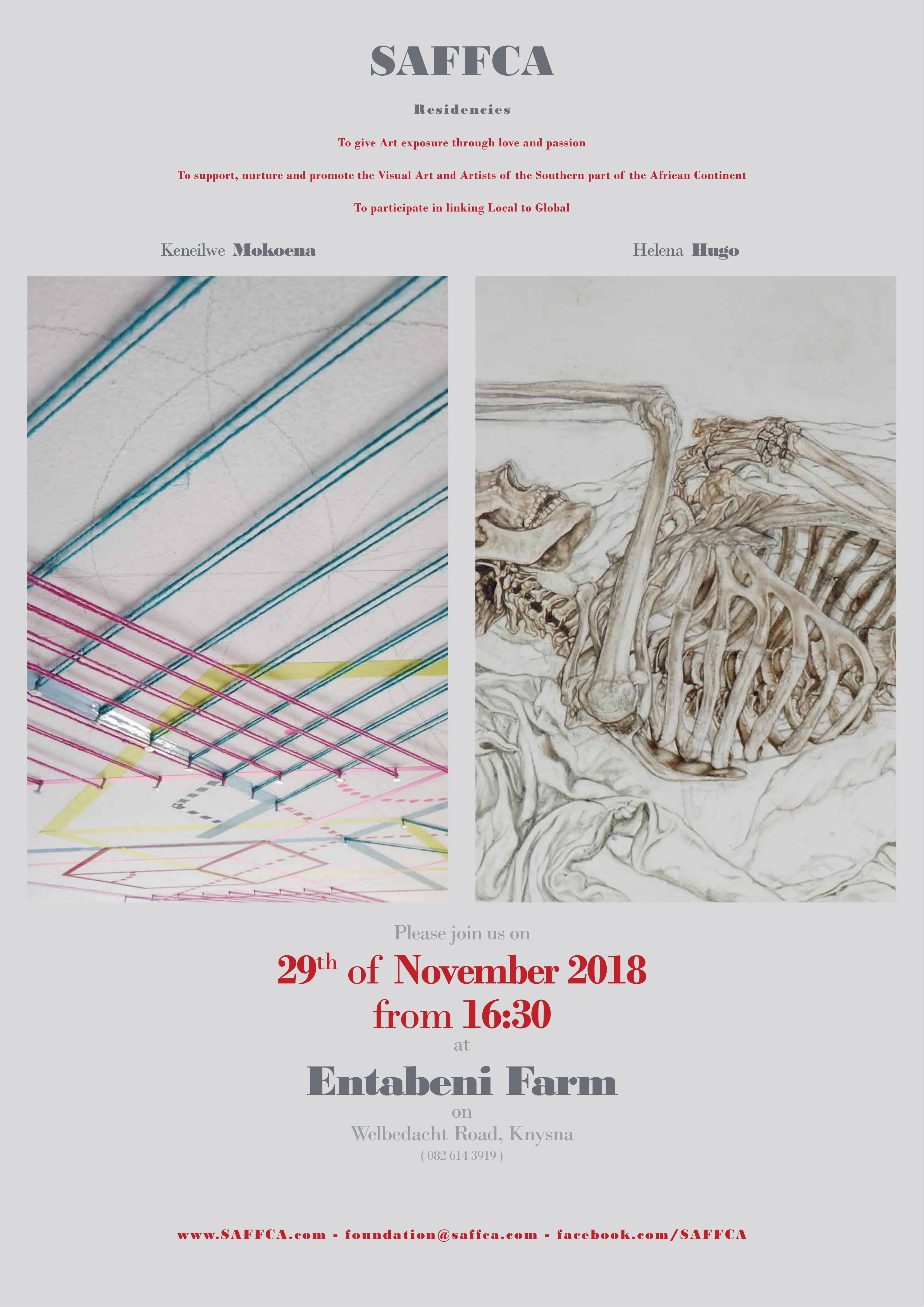 ABOUT THE ARTISTS PROJECTS AT
ENTABENI FARM: 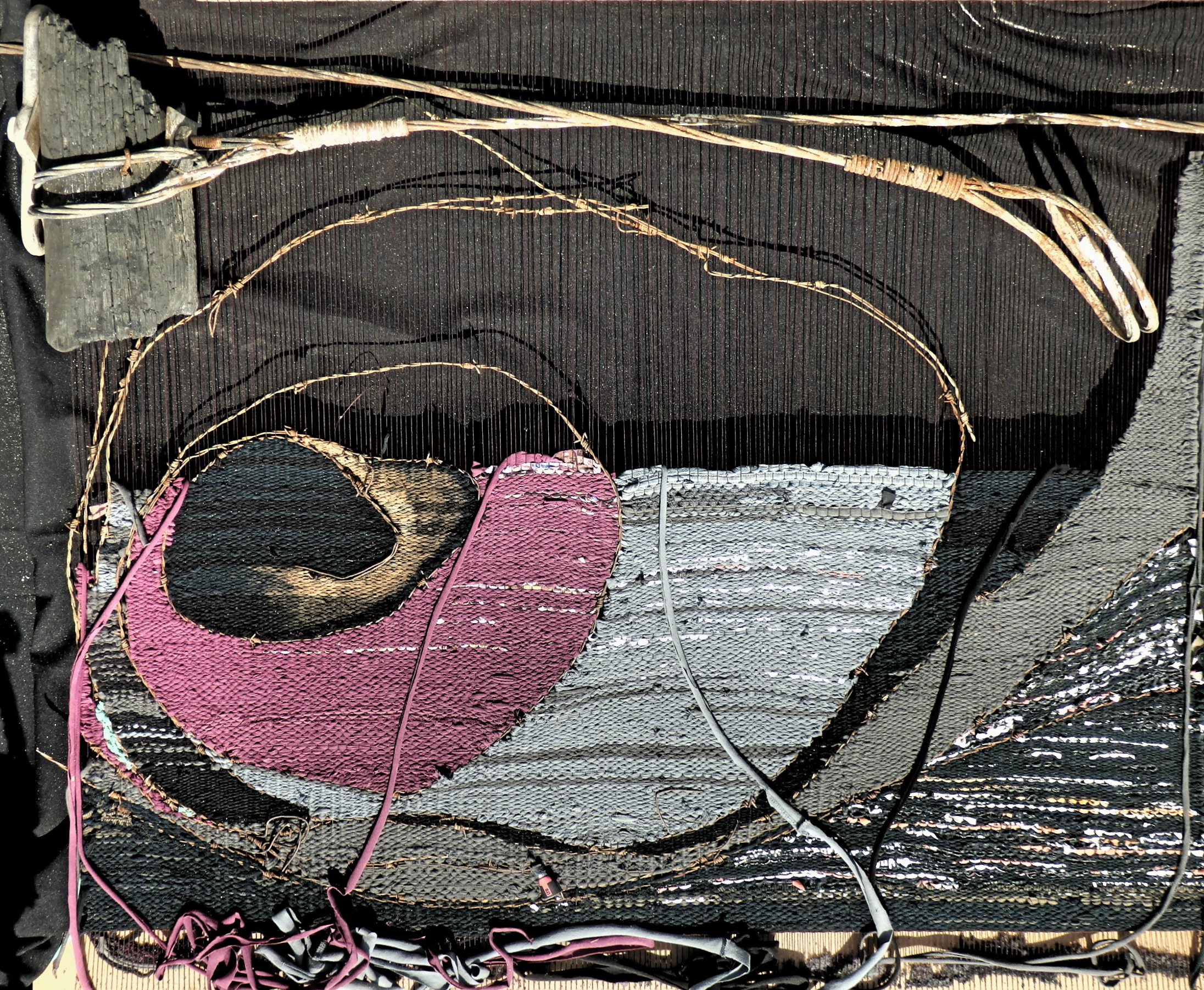 Helena Hugo has a recurrent theme in her work, that of the human condition, human frailty and the cycle of birth, life, death and resurrection.

For her and Keneilwe Mokoena’s open studio day end exhibition she will again present work delving into the same subject matter as well as exploring these themes in nature and adding to this, investigations into migration, territorialism in humans, needless destruction and the creation of boundaries and fences, which curbs natural life cycles and survival.

Her body of work will consist of a series of sketches in oil of human skeletons and draped clothing, using a very limited almost monochrome palette of blue and brown.

She will also exhibit fibre artworks created from barbed wire and clothing previously owned by migrant workers. a Series of photographic self portraits depicting “ self shadows” in water will also be on display.

All of the work carries a strong reminder of our transient and fragile nature as well as that of our environment.

The work “Fire!” is a direct reaction to the devastating fires which raged through the garden route district. The work started out as a depiction of nature’s ability to “resurrect” itself, the spiral inside the work being a symbol of the slow but sure renewal which was impressed on the artist at the commencement of the residency by the environment around her. The barbed wire and found objects (pieces of burnt telephone poles which will later serve as a support for the fibre art piece to hang from) were collected in the veld just outside the farm and were remnants of the 2017 fire.

However on 24 October 2018 a less violent but more devastating fire broke out on the Outeniqua mountains and destroyed over 68 000 hectares of land in 10 days, 4 times the area of the 2017 Knysna fires. The flames on top of the distant mountains could be viewed from the farm.

Thereafter the artwork has developed into the depiction, simply of a fire, the spiral now taking on the form of a destroying flame.

The use of barbed wire in this work was motivated by the equestrian training ground and horses that can be seen from the farm on the plato below. Even though these are domesticated animals, viewing the horses being exercised in the enclosed circular corral and also having read about how panicking horses ran into fences in the book “Knysna fire stories” compiled in remembrance of the 2017 fire, questions were conceived regarding the appropriation of huge territories by humans for themselves and the erecting of fences, walls and boundaries between small plots of ground as well as borders between countries and the devastating effect this can have on nature in terms of fragmenting animal and plant territories, the hampering of migration and even restrictions it creates for freedom of flight during something like a fast moving fire.

Thereafter limited scope and areas for the surviving animals to migrate to after habitat loss from a fire are also to be thought of. The unwillingness to share our personal and national territories with certain animals and humans is in some cases understandable and may even be a good way to protect species or cultures, but it can also be unnatural and destructive.

Clothing form a very strong personal bond with the owner’s life – it is close to the wearer’s body and it shares the owner’s life for a time and it shares their work. The artist has an interest in creating new objects with new meaning from old and withering or discarded objects and often use clothing obtained from migrant labourers. This time all the clothing was obtained from a Malawian migrant worker on the farm. This farm worker for whom it takes three days by bus, crossing two borders to travel from Malawi to South Africa, described the 2017 fire as “terrible” and says that he was afraid. One of the pieces of clothing he donated was an old Rolling Stones memorial t-shirt from their  “On Fire” tour. The dates of their various appearances in different countries, although taking place in 2014, included dates in June, amongst others the 7th of June, which was the date on which the 2017 Knysna fires started. This date and more June dates during which the fire was raging in Knysna and the areas around Knysna are woven into the fabric of the fibre art piece on the bottom righthand corner. 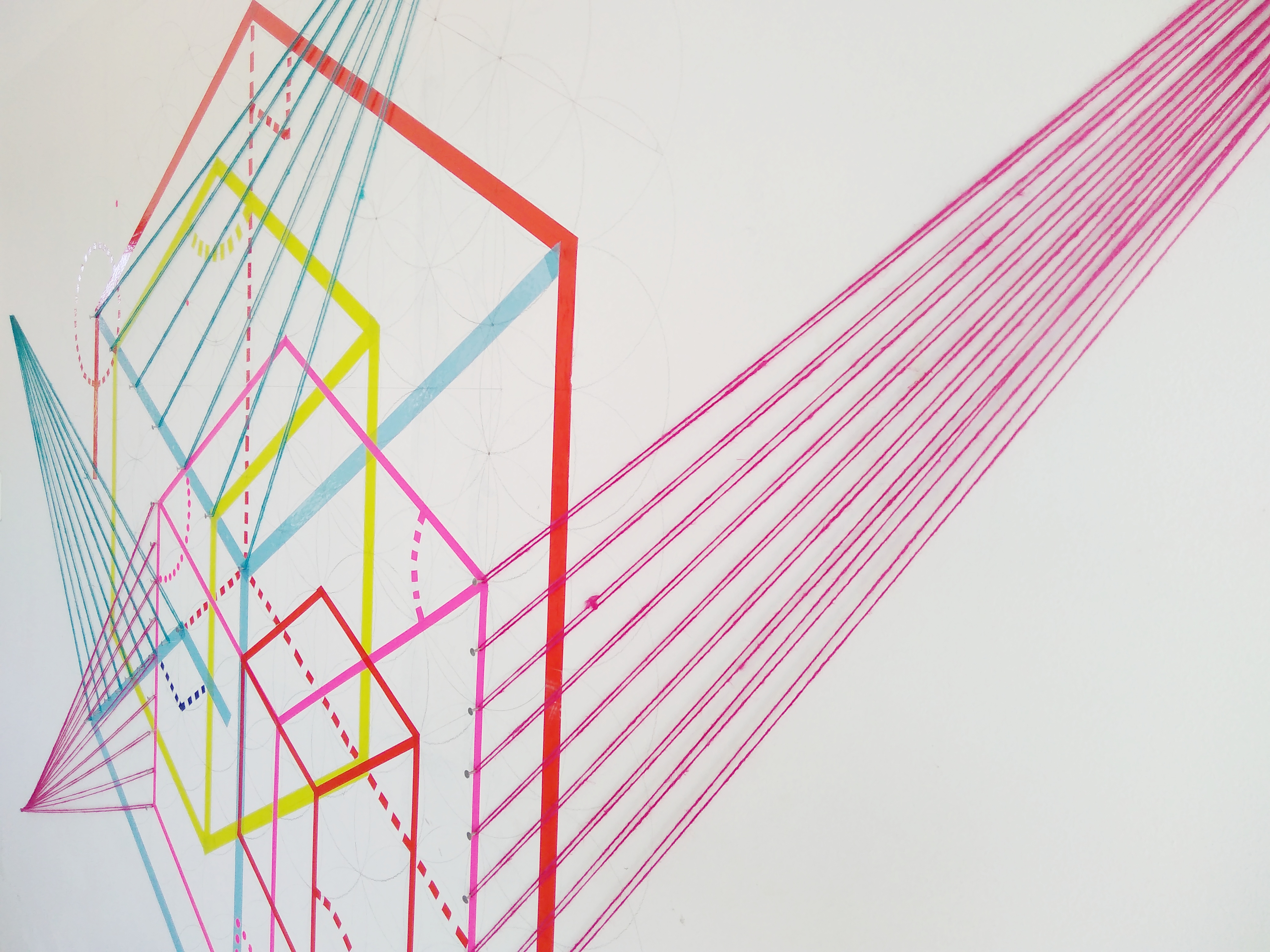 Geometry – The Language of Space and Form

Throughout history, Geometry has been a phenomena contemplated by diverse disciplines such as Mathematics, Architecture, Arts, Religion, Philosophy, Culture and Technology, as a method of understanding spatial concepts. It is a naturally occurring phenomena throughout Nature, and has fascinated Artists and Mathematicians for centuries. This body of work explores the use of space and form in order to make sense of how we often think of ourselves as the centre of a constant spatial reference. Space has a way of simultaneously bringing us closer, while separating us. Form is a constellation of points, connected by lines. Points, represent the fundamental elements of matter, i.e. atoms. Lines represent the collective movement of points in space-time. From these two simple elements, an infinite amount of forms can be created. All of Existence is connected through complex patterns of order and chaos. We, as single points in space-time, are connected to everything one and everything else that exists and will ever exist. 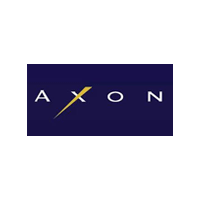