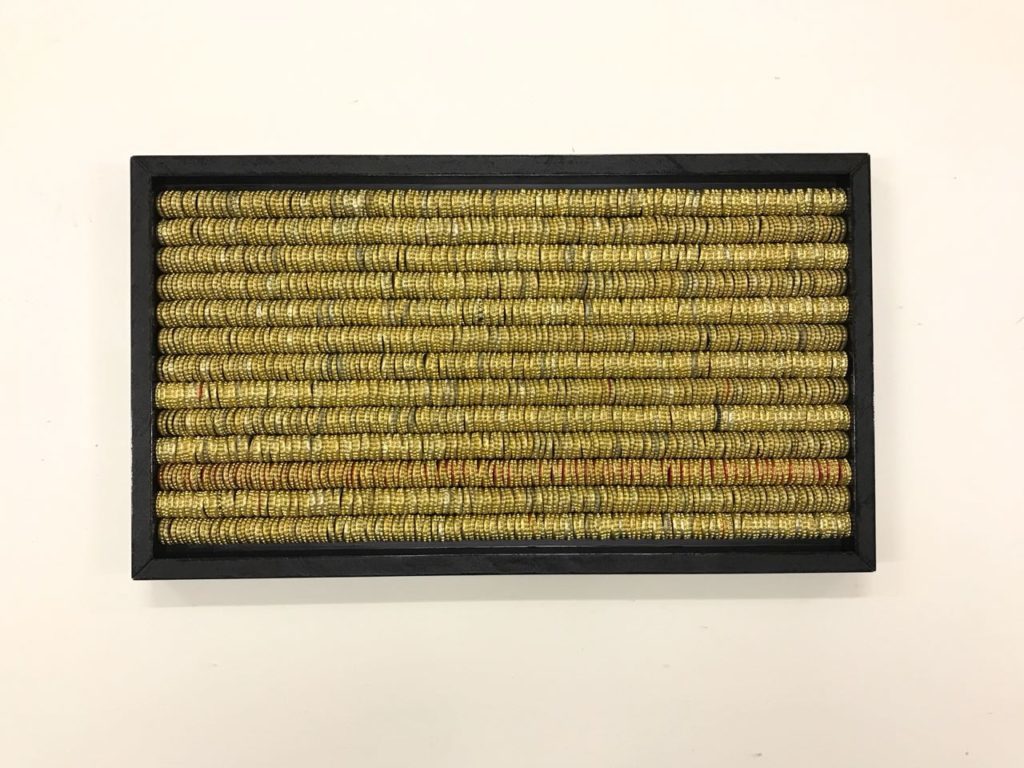 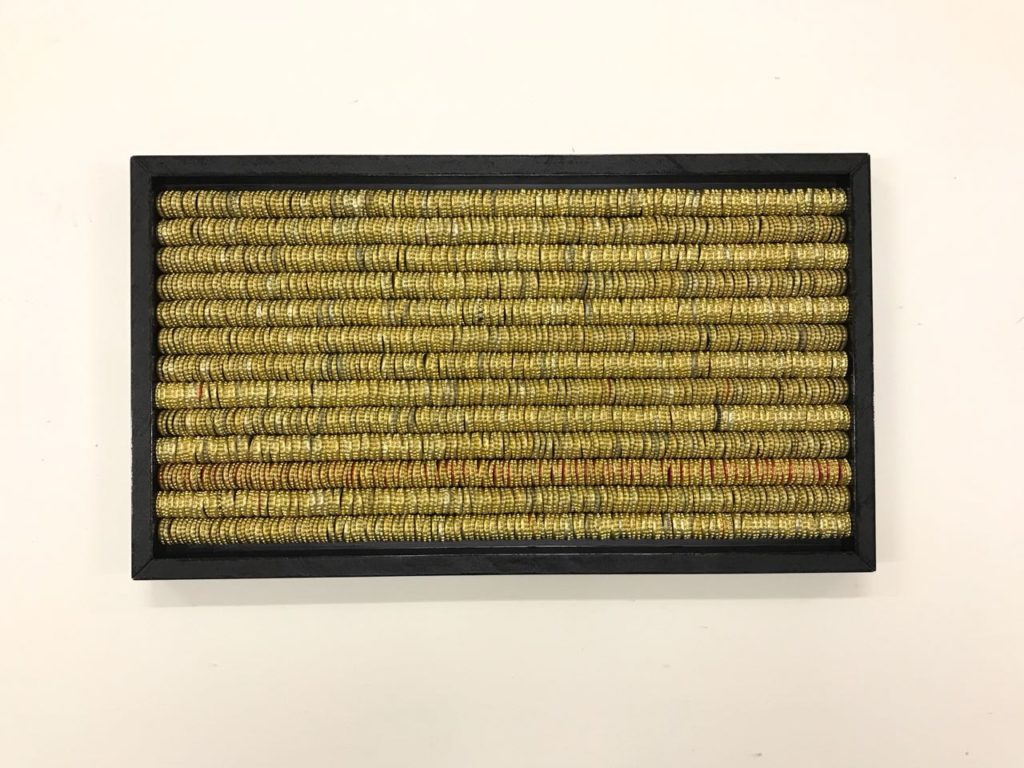 Artist Statement and Synopsis for:

For a city formed out of a nineteenth century gold-rush and nicknamed “Egoli,” it is perhaps somewhat surprising that the only gold to be seen on the streets of inner-city Johannesburg, are in the glimmers of light reflected off discarded beer bottle tops strewn along the pavements. These tops are the debris of socio-economic processes of manufacture and consumption. Their presence is a reminder of the excesses available to us in our modern day. With Standard (2017), the artist’s intention was to bring together these “glimmers of light” off of the mundane bottle-top into a structured form, and focus the viewers attention, asking questions of perception, desire and value. The intentional use of gold-coloured tops and the play of light is intended to seduce, and such a feeling mimics the hold that not only alcohol has on some people, but also that of greed, the desire for gold, and all that it appears to promise.

Standard (2017) is an early work in the larger body of work produced around the “material research” undertaken by the artist into beer bottle tops and the role they play in the social fabric of our times. Through an ongoing engagement and fascination with the discarded, used, beer bottle top, Chris Soal has, over the past three years, built up a substantial body of work through a focused engagement, best likened to a process of “material research,” seeking to challenge and engage the assumptions and perceptions around value.

Standard (2017) was made through a process of collecting used beer bottle tops from various shebeens, taverns and bars around Johannesburg every week. The tops are sorted according to colour and threaded together on steel rope, creating a golden thread, allowing the artist to “draw” in three dimensions, and “paint” with found objects. The bottle-tops are strung together in rows, and due to the angle of the edges of the caps, light reflects in two different directions, thus creating areas of light and dark. The form decided upon was that of the American flag. Referring to works such as “American Flag” by Jasper Johns; this work through it’s title “Standard”, hints at the US Dollar’s use as a standard in world economics, as well as the American political domination the global sphere, and culture being shaped by the productions of Hollywood. However, it is not real gold that the tops are covered with, and the deceitfulness of its alluring appearance raises questions about the visions of the “good-life” being broadcasted by the global cultural dominance of one source. The work’s title also alludes to levels of education, at times referred to as “standards” and hinted at in the abacus-like rows of bottle tops, posing questions around notions of cultural formation, such as formal education, but in this instance extending also into cultural rituals of drinking and public engagements.

The bottle tops have a strong association to currency, not only in form and colour, but also in that each bottle cap represents a beverage that was paid for and consumed. The labour apparent in the making of the artwork also signals an economic practice that is centred on currency and value. The bottle caps are never altered in colour, and often times retain traces of their handling, both in smell and touch, creating a visceral relationship with the viewer. Keeping the integrity of the bottle caps intact is important in responding to them as found objects, objects that carry their own meanings and histories. Standard (2017) is a material meditation on desire, cultural formation and value.