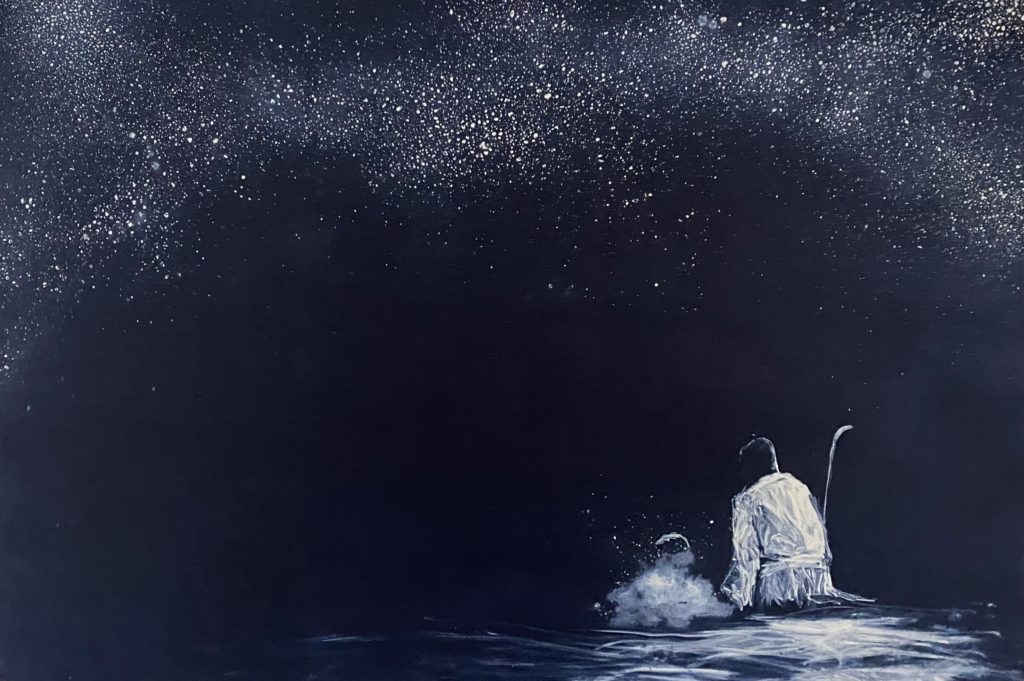 Themba Khumalo is a Soweto-born and now Johannesburg-based visual artist. In his 10-year professional career he has had over 20 group show appearances, featured in just over 10 art fairs, and has had 5 solo shows both locally and internationally. His current art subject Emhlabeni reflects the social, political and spiritual landscape in current South Africa, and the understanding of land as identity.

“Emhlabeni” loosely translates to earth in English, and carries far greater meaning in Isizulu. These meanings are made visible through the nuances expressed in the drawings, painting with coffee to mimic the earth and soil tones, and the use of vernacular titles.

Themba Khumalo looks at the subject of land measured through the lens of his drawings. These renditions portray pieces of land as witness to the dispossession of the people, the use of illegal occupations protest, and the loss of hope.

Themba Khumalo: An Ode to The Spirit that Sweeps through African Soil

How does one look at the emotive canvas of Themba Khumalo, and not carry with them the inescapable grip of the African soil after such an encounter? How does one forget the expanse of the sky and horizon that enrapture the eyes mercilessly? Most importantly, how does one forget the impact of honesty combined with unruly emotion, seen in every single mark that Themba makes on surface? We cannot. And for this reason, honesty and vulnerability will prevail as we roam through the landscapes that he presents us with in his latest art subject Emhlabeni; which not only displays the vastness of his ability in mark making, but carries with it, an unyielding spirituality, as an ode to the earth that carries us all. We hope you will venture with us once more this year for our final SAFFCA Artist of The Month for 2020. We ask you to walk the journey with us, and step into the various scenes of unyielding emotion given to us by the ever talented, Themba Khumalo.

“Sicela Usibonise Indlela” meaning “Please show us the way”, opens our travel, as we tentatively “step” into the turbulent atmosphere of the artwork. From the stormy; overbearing clouds; to the expanse of the earth that covers us and the two figures in white; not forgetting the dark, unsettling figures or creatures we see with stark white eyes – there is no peace to be found in this image. With this title taken as a metaphor for seeking hope, all we are left with is a silent prayer, that we say with the artwork, for way out of our own troubles.

In our roaming we come across the two peaceful figures, dressed in white, who appear completely tranquil in the instability of the earth that surrounds them. Both seem unbothered by any potential danger that the gloomy open space may bring. They carry on diligently in their elusive interaction with the land – the figure on the left submerges half of their body into a puddle of water, while the figure on the right toils the land as though it were a perfect day. Both of them serene, diligently committing themselves to an earth that just might erupt.

The angst of the work is unmissable. Hanging in the balance, at the very top of the image, we see the remnants of the “dance” or “fight” the artist has had with the surface as he manages to bring to life an element we seem to dismiss so easily in depictions of landscapes: The Sky.

The sky is always symbolic of a place look up to, for supernatural aid and intervention. In this case, the artist’s hand grapples directly with this space, no longer taking the passive stance of looking up, but sweeping and scraping away at its vastness. In a final plea, we see the two hand prints (presumably of the artist) as an urge for the skies to remember the beings who live below it on the very land it covers, beckoning for what lives above to “Please look down”.

“Please Help” is a drawing, that painfully translates its own despair with the title alone. After a visual engagement we come to the realisation that this image urges for an internal interrogation. As all interrogations would have us do, we begin to ask questions while we converse with the work. What is left to do when your very own land leaves you desolate? Where does one turn to when a place you once called home casts you out?

In the next scene we stumble across, we are encountered with the saddening reality of an individual left abandoned. They lie hopelessly wasting away in foreground of dark settlement that rests in the background. The settlement, or possibly what seems to be a city, rests in quiet of the darkness, as though no man was sprawled in agony at its gates.

Themba reveals how ruthless land can be to its inhabitants, as he confronts his viewer with a moment of hopelessness. His engulfing method of mark making is the showcased beautifully in the image. His marks move swiftly across the page, swallowing up half of the individual almost like wind or a faint spirit, resembling the earth’s attempt to soothe and protect a bruised man.

The scene presents itself with it a well-crafted balance of motifs for both tenderness and brutality. We see it in the medium that Themba takes such a strong liking to: charcoal, which tells its own story. Charcoal is a substance that is the result of pillaged and burned trees of the earth. While acknowledging its brutal past, it is an honour to see the new future it has to create beauty when placed in the hands of an artist.

We walk away from the image with sorrow, taking one last look at the sign that reads “Please help”, a man’s final plea for rescue.

PASSOP – ENTER AT OWN RISK

Our challenging voyage across the land continues and we come to a halt in front of this barriered image. Titled “Passop – Enter at own risk”, the work reminds us of numerous signs found across South Africa, which serve as a deterrent to trespassers onto owned land or property. It is no longer a land that belongs to all, but hectares and acres of the earth are now allocated to a designated few. The infamous barbed wire which guards stretches of land across South Africa tells the viewer they are not welcome to step into the space it protects. Here we take the position of the outsider and trespasser looking onto a landscape. Themba places both a physical and figurative threshold that onlookers need to look through in order to access a view of what lies behind. He does not forget to gift the image with beauty, giving us a peaceful scene, with high contrast and a sensibility that almost makes the image audible. While we imagine the clouds moving, and wind silently howling, we can take in the vastness that we will never possess.

We end our pilgrimage across the land with an image that oozes spirituality and hope. On a base level we see a baptism taking place, however the mystical energy of this work is one which viewers will always remember long after seeing it. With a simple, yet masterfully executed technique of leaving spaces white to make an image, Themba has created an unforgettable moment. Our immediate instinct is to abandon ourselves to the vastness of the night sky and all the hope it promises.

Themba reminds us of the sacred bond between land and spirituality. After a gruelling passage through the land and witnessing elements of its harshness, we are given a time to exhale. We count each star that has been placed for us, and witness the serenity given by the dark waters, which are illuminated by the night sky. We end our journey at peace, as the earth gives us permission to dream once more.

Also available for purchase in this edition:

With Love and Passion,