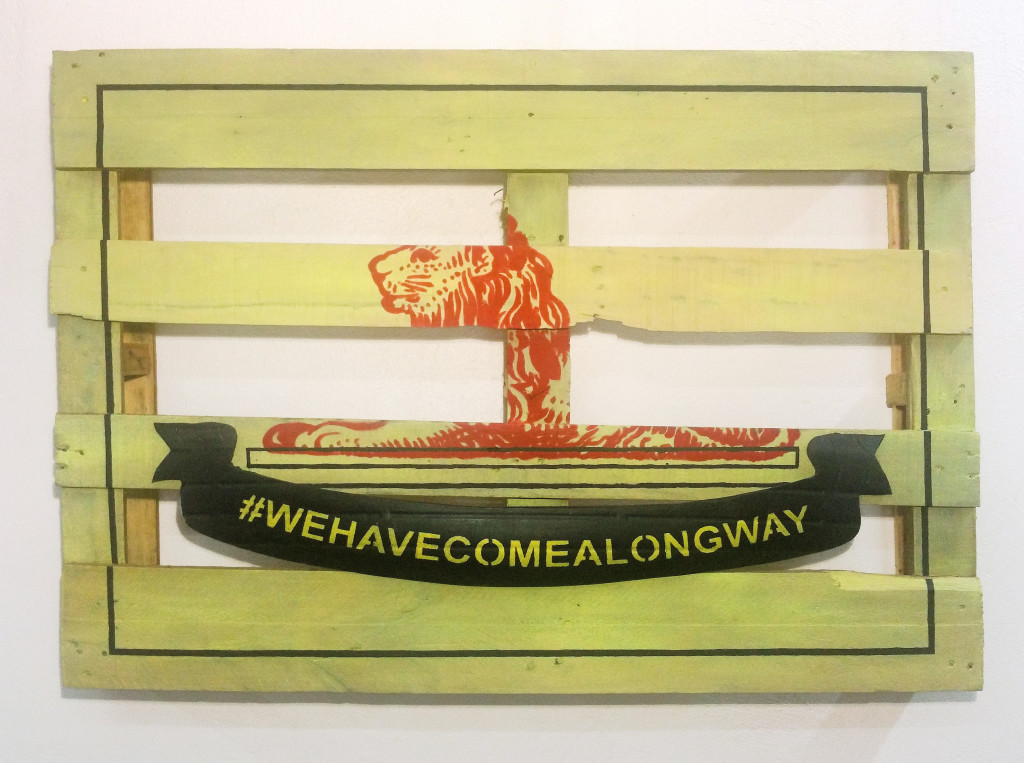 When one super-imposes images, inside the the ‘palimpsest’ of visual sources their relative alignment can coax something new out of the paterns of interference, emergent properties that are different from the sum of the parts. #WEHAVECOMEALONGWAY superimposes objects, images and concepts. A kind of Deleuzian neuro-image emerges.

Technologically enabled process offers the purity of discrete mathematics and generative methodologies allow access to the realm of ‘essence’, but sometimes the ‘real’ demands to be addressed. To do it justice sometimes seems to require working in a non-clinical way, tactile. Honesty is not about perfection, by definition. Sometimes tactile presence is required and one has to swap tools, in this case an angle-grinder for the camera and power drill and screwdriver for the keyboard and mouse. But tools are only tools.

Socio cultural upheavals like our recent student protests (during and after which this piece was created) and considering the waxing and waning of power structures, one is struck by the weight and impetus of history. Every moment carries the weight of the past as well as the future, as do each of us. This is for André what the salvaged wooden palette is mostly about. It is about bearing load, and about the authorship of function and utility in dialogue with the constraints, scuffs and blemishes of what is as it is. Labour, responsibility and the constraints of available resources.

The match box and tyre tread

A match box holds potential and energy, it can be a tiny Molotov cocktail in waiting but also has a ‘memento mori’ subtext, pathos. In existential terms both the match box and tire as objects largely sacrifice themselves in service to their utility before being discarded, as on some levels necessarily happens with us all. In 1986 Winnie Mandela reportedly said “With our boxes of matches and our necklaces we shall liberate this country.” – Necklaces referring to the violent execution practice that appears to be a significantly South African phenomena. The combination of the tire tread and match box is a humble monument of remembrance, however subtle, of our histories of trauma and violence.

(André fetched the tire late at night from a ditch in Zandspruit near where he used to live – reportedly the informal settlement with the highest population density in Southern Africa. Zandspruit is known as a kind of half-way-house for foreigners and the poor hoping to find a livelihood in Johannesburg’s urban sprawl. It is known for its frequent protests which usually erupt into violence. It is also not without ‘mob justice’ which sometimes involves extremely violent forms of punishment, including burning. )

The lion is perhaps both African, and or also, given the almost hyraldic language, and English or Anglo-Saxon, colonial. Intersections, confrontation predation and merging.

Worn tires, as that used in this piece, are dangerous while embodying the furtive aspects of distance, time and history. Having travelled a long distance, in and of itself, does not necessarily mean progress has been made.

All of this could be read through the lenses of melancholy, sentimentality and nostalgia (which is fine), but there is also the hope and promise, the emergence of enabling phenomena such as social media, new avenues for the realisation and exploration of things like democracy.

The hash character is part a cage’s bars, part a palette. Sometimes a cage is a foundation for liberty.

If nothing else, we have come a long way.